Hytale uses algorithms to create a large sandbox worlds, with multiple biomes/environments where players can explore and adventure. This is called procedural generation. In the case of Hytale, it is used to generate the world and all its inhabitants, from every big castle to every rock on the path of your adventure.

Zones are unique procedurally-generated areas in Hytale's Adventure mode, with each zone having unique sets of Prefabs, Creatures, biomes, quests, characters and more.

As mentioned in the December 2019 Progress update, it is possible the player will be able to select out of three of the four zones they shall commence in. Although it has not been decided whether or not it will be randomly selected or manually chosen by the player.

Hytale's Zones will also progressively increase in tiers of difficulty the further a player ventures, the quality of the rewards will appropriately scale with the difficulty of the enemies. at the current moment it is known that it only applies to three of the four zones (specifically the first three).

Zone names are not final.

Zone 1 (currently known as "Emerald Grove") It has a lush green surface, lakes and sprawling caves under the surface and hot magma underneath the surface deep underground. It varies between extensive green plains, swamps and forests. Zone 1 embodies the "Earth" element.

Zone 2: (currently known as "The Howling Sands")[1][2] is an arid environment, with very little vegetation, akin to a vast desert. Large sand-like temples would be present on the land and would have a similar underground structure to Zone 1, only with sand as the main building material instead of stone, and with little to no fresh water. Zone 2 embodies the "Wind" element.

Zone 3: (currently known as "Borea")[3] is a much colder and snowy zone, with large mountains and taiga forests. All life here has adapted to the cold temperatures. Underneath this zone ice, snow and water cover the walls filled with fragile life. Lava is far less likely to appear here. Zone 3 embodies the "Water" element.

Zone 4: (currently known as "Devastated Lands")[4] is a hellish and barren environment devastated long ago. Scorched stone dominates the land, with lava rivers and lakes covering the surface. However, beneath the surface, the player can descend can find calmer caves with water, lush foliage and various creatures; in the lowest level the foliage and water have consumed the area leaving a dark and dangers place where predators roam. Zone 4 embodies the "Fire" element.

Zone 5: (referred to as "Skylands" as it's placeholder) There is little known about the fifth Zone apart from it's affiliation with the Lightning element. It's placeholder, seen when using developer tools appears to confirm the suspicion that the Zone features a number of floating islands.

Zone 6: (referred to as "Poisonlands" as it's placeholder) There is nothing known about this zone yet. Like Zone 5, it's existence is confirmed. Zone 6 will most likely embody the void element.

The Deep Ocean technically isn't listed as a zone, although it stands separate from other zones and has even been described by developers as "a zone all by itself". The deep ocean separates the Infinite Lands from the main continent of Orbis.

In the Ocean exist tropical islands.

Although each zone has different environments, each one has its own world-generation system. Each zone is composed of several biomes, such as forest, lakes, hills, ravines etc.

Each zone has its own coastline, with ocean bordering at part of it. Even oceans have their own biomes within, giving players more to explore under the water's surface. Players can travel further out to Deep Ocean waters to find even more rewards and interesting content, however proper planning and preparation is needed to survive those environments.

Outside of the natural world, prefabs and dungeons can spawn. Dungeons spawn with a series of rooms connected together, each one different, with a "treasure room" in the center. These will vary from zone to zone, giving different challenges in each one. Prefabs include pre-made structures, like towers or castles. However they also include objects such as trees or rocks. There have been thousands of prefabs already made for the Hytale world. Despite only 4 zones being confirmed and the game still in the process of being designed, there are already over 7,000.

Aside from regular dungeons, players can find portal dungeons, a special version of dungeons that will lead them to a small "pocket" world, where regular rules don't apply, and creativity will be necessary to conquer them.

For more information, visit is own page

Prefabricated content, also known as prefabs, are a collection of objects used for generating zones. Currently, there are around a total of 7,000 different prefabs in Hytale. The most common prefab are trees, which have many species and variations, depending on zone and biome. Another majority being Rooms, as each Parent room can spawn with a multitude Child Rooms (or Extentions). Alowing each Room or Dungeon to feel Unique.

Caves are also found on Orbis. They feature different creatures and resources, which are procedurally-generated, based on rules of the particular zone. However, most of the time, generation of these features follows the same format, which can be affected by underground prefabs, dungeons, and other natural generation like ravines, offering some variation.

Ores may spawn, embedded within cave walls, making it easy for players to gather minerals.

Biomes and world generation in Hytale are things that will be completely mod-able, along with blocks, NPC's and environments. As a result, a truly dedicated modder could design their own entire world!

One big prefab on Zone 1

Zone 2, as shown in the trailer

A sunset over Zone 3 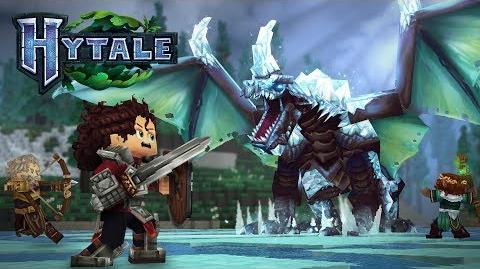