Weapons are combat-oriented pieces of equipment, which provide players or mobs with the ability to deal damage in Hytale.

Weapons have three known classifications - melee, ranged, and magic. It is unknown exactly which weapons will appear in-game upon release, but more detailed information will be added over time, as it is revealed by Hypixel Studios. Some weapons detailed here are from official concept art, the "Hytale UI" developer blog post, or gameplay footage, or other promotional material. The nature of these weapons, at the moment, is unknown. These could be randomly-generated, random drops (mmo-style), or quest-oriented weapons. Until the release of Hytale, all details are subject to change.

Many of Hytale's weapons include daggers, swords, longswords, warhammers, maces, spellbooks, throwing spears, bombs, hatchets, battle axes, crossbows, trork weapons and many others. From concept art, large trork cleavers, wands, makeshift knives and many other special weapons can be seen.

Promotional images have shown factions like the Trorks and Outlanders wielding large weapons. However, it is unknown whether a player will be able to wield weapons such as these.

These weapons fit under a currently unknown category 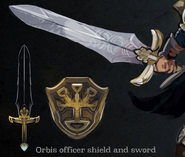 An Orbis Officer sword and shield.