Works in groups of Two or Three
The Scarak Tank is a Scarak Archetype. The tank is known for its shield-like face and huge body mass from which it gets its name.

The Scarak Tank evolves from the Scarak Larva. From that point it is not fully known what exactly their purpose is, though it is assumed that they perform defensive tasks.

These scaraks are seen as a one of the last lines of defense when detaining an intruder, this is accomplished through their ability to work in "groups" to protect or close off corridors, forcing the player to use an alternative path way, or blocking off a Players exit. They can also work with the Warrior to attack players.

In the past, Tanks were equipped with spiked metal harnesses and chain and were originally used by the Sand Empress to fight opponents and move heavy construction walls.

The concept art featuring all of the Scarak Archetypes, including the Tank 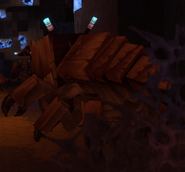