Hytale Wiki
Register
Don't have an account?
Sign In
Advertisement
in: Articles in need of cleanup, Mobs, Neutral,
and 2 more

The Klops are a faction that may appear in-game when Hytale is released. Klops live in Zone 1, in comfortable underground homes called "Hidey Holes".

Klops are a neutral and defensive mob, and likely act as merchants and traders in some parts of the world. If a player steals from the Klop, or disturbs objects in their home, they will become hostile. 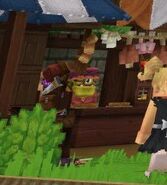 A possible klop merchant appears in one of Hytale's promotional images.