When will Hytale release?

The Hypixel Studios team has said in the Summer 2021 Development Update that Hytale will not be playable before 2023 and it could very well take longer.

However, Noxy the CEO of Hypixel Studios said on twitter to the question if 2023 means beta, that they don't wanna hype people up for some big public launch before 2023 at its earliest. So there could be a restricted or closed beta in 2022. 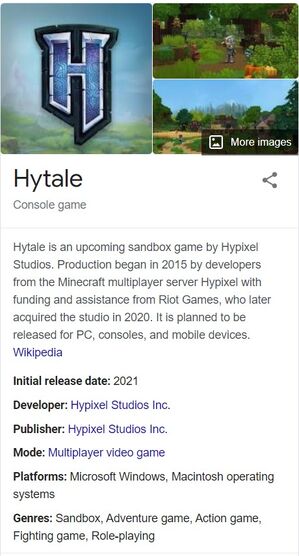 Reasons for the delayed release

Prior to the incredible reception that the Hytale announcement trailer received, in which it reeled in a whopping 59 million views (as of December 2021), as well as the later acquisition of the Studio by Riot Games, the Hypixel Studios team stated that they previously intended to release the game far earlier, as early as sometime in 2019. However, after realizing the potential that this game after it took the entire gaming industry by storm, the scope of the project altogether completely changed, seemingly overnight. The team has since stated repeatedly that they are striving to "get this right" and that a "a delayed game is eventually good, but a rushed game is forever bad", which is a quote originally made by Nintendo developer, Shigeru Miyamoto.

The Hytale Community was rather split down the middle in response to roughly two years of an unspecified release date with some losing patience with the Hypixel Studios developers, but a clear majority remaining interested and understanding of the immense pressure that the team is under in order to make the initial release as earth shattering and impressive as possible. Many people think that Hytale will compete with minecraft.