disguises itself as a Cactus

The Cactee is one of the mobs that may appear in Hytale's release. The Cactee is a humanoid cactus-like creature that lives in Zone 2 (Howling Sands). Despite its friendly appearance, Cactees are actually hostile.[1]

Cactees will disguise themselves as actual cacti whenever the Player is looking its direction. Once the Creature has turned its attention to something else, The Cactee shall reveal itself and proceed to make its way closer. Once it has closed the gap it shall proceed to attack the player. It is currently unknown as to why this is done, but perhaps it is done for simple shock value, or to keep the Player on guard, and not to linger anywhere. It is currently unknown if Cactees attack any other entity other than the Player. 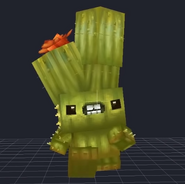